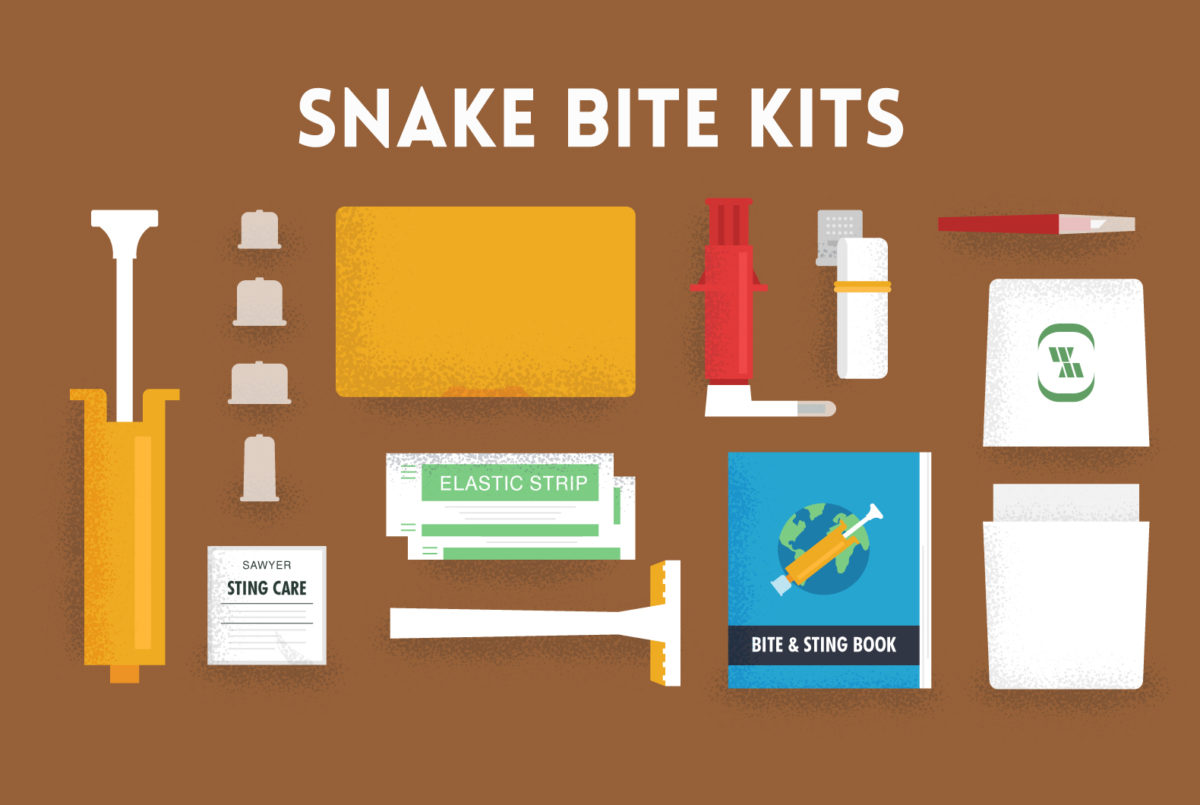 If you are unfortunate enough to have been bitten, the first thing you’re going to want to do is to find out how to treat a venomous snake bite, such as using a snake bite kit. Sometimes, you may be lucky and have only endured a ‘dry bite’, wherein the snake has not actually injected its venom. However, if it has gone for the killer nip, your body will not react well to the venom. Some of the effects of being bitten by a snake include:

There are many myths flying around as to how best to handle being bitten by a snake and with this article, we aim to debunk some of these.

This post will cover what kind of snake-bite kits you can find to buy and whether, in fact, you should use them at all. We’ll try to point you in the right direction by balancing information from the snake-bite kit manufacturers and thoughts from leading medical experts. It is important to establish that snakebites treated by medical professionals almost never result in death.

What is a Snake Bite Kit?

Typically, kits to remove snake venom are suction devices, which claim that once applied, will draw snake venom out of your wound.

The normal contents of a snakebite first aid kit include multiple sizes of suction cups, lymph constrictors, and possibly antiseptic swabs. To use the suction device, you place it over the wound and carry out the process for 10-15 minutes, according to representatives of Sawyer, a leading manufacturer of these products.

Until recent years, the effectiveness of snakebite kits, or suction kits, wasn’t doubted and medical experts approved the use of them. The idea isn’t to replace professional medical care, but as a means to treat the bite if it may be some time before you are in the hands of the experts.

However, with recent studies, there is growing concern over the use of such devices, with experts now claiming that using them can actually cause more harm than good. Medical experts also state that they are not hugely effective in removing the venom in the first place and therefore, should not be used to treat venomous snake bites. There have been snakebite kit reviews and studies which back up these claims and we’ll go over these.

One of the most popular suction kits which are now under debate is the Sawyer Extractor. A study was done on eight males with mock venom. The ‘venom’ was treated after 3 minutes, which is the recommended time, according to the manufacturer.

The study concluded that, although the extractor pump removed bloody fluid from the ‘snakebite’, there was next to no mock venom extracted. This means that it is unlikely to be an effective way to treat a venomous snake bite.

A further study on pigs was conducted, with varying methods in order to best cover most eventualities. The study concluded similarly, that there were no benefits demonstrated in using the extractor pump. In fact, this study suggested that the device can cause further injury. This is due to the concentration of toxic venom on the tissue.

The owner of Sawyer products claims that the study was inaccurate, primarily due to the fact it was conducted on a thick fleshy part of the body, rather than where most snakebites occur; on hands and feet, with the venom being just under the skin.

As a result of these studies, venom extractors are no longer recommended by leading medical professionals, however, there are many people who claim the devices are beneficial. It is recommended that your bite is treated by professionals as quickly as possible.

In the event of a snakebite, time is key, and the more time someone spends trying to perform first aid on themselves via a suction device, the longer the venom is likely to be in their body, destroying tissue. One of the biggest concerns at hand isn’t necessarily the damage done by the extractor, but the damage caused by delaying or not attempting to find medical attention on the trust of this gear working.

Another main issue is that most snake bites occur in intoxicated, young men who are unlikely to make the correct decision. They could quite possibly choose to rely on a device, like the Sawyer Extractor, and refuse to call for professional help.

If you want to spend money on equipment to help prevent you from poisonous snakes, we recommend you look into gear that will prevent the bite, rather than rely on treating it yourself. You can buy snake gaiters or snake guards, which will certainly help from a bite occurring.